The literal meaning of the word domestic violence basically means any violent or aggressive behaviour of any person within the home as the word here is ‘domestic’ or in other words a violent quarrel between a couple which may force a female spouse to file for mental harassment basically under domestic violence act and other provisions of Indian Penal Code (IPC) and Criminal Procedure Code (CrPC).

According to a National Family and Health Survey in 2005, total lifetime prevalence of domestic violence was 33.5% and 8.5% for sexual violence among women aged 15–49.

The Protection of Women from Domestic Violence Act 2005 is an Act of the Parliament of India enacted to protect women from domestic violence. It was brought into force by the Indian government from 26 October 2006. The Act provides for the first time in Indian law a definition of "domestic violence", with this definition being broad and including not only physical violence, but also other forms of violence such as emotional/verbal, sexual, and economic abuse. It is a civil law meant primarily for protection orders and not meant to penalize criminally. The act does not extend to Jammu and Kashmir, which has its own laws, and which enacted in 2010 the Jammu and Kashmir Protection of Women from Domestic Violence Act, 2010

There are several domestic violence laws in India which includes:

• There are various regulations or provisions being made for protection of women against domestic violence under the statute such as Sec.304B of IPC pertaining to dowry death.

• Under section 313-316 of IPC female infanticide has been made punishable which means forcefully terminating the pregnancy of a women.

• Other sections of IPC dealing with these issues are section 305-306 related to abetment of suicide and 340,349 of IPC respectively wrongful confinement and wrongful restraint.

"Don't Be A Silent Victim Fooled By So-Called LOVE Say NO MORE To Domestic Voilence." 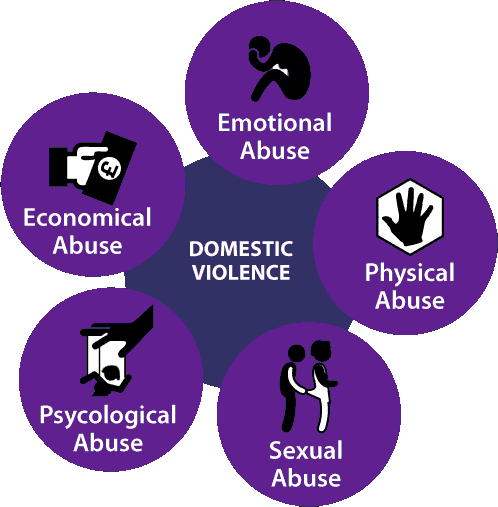